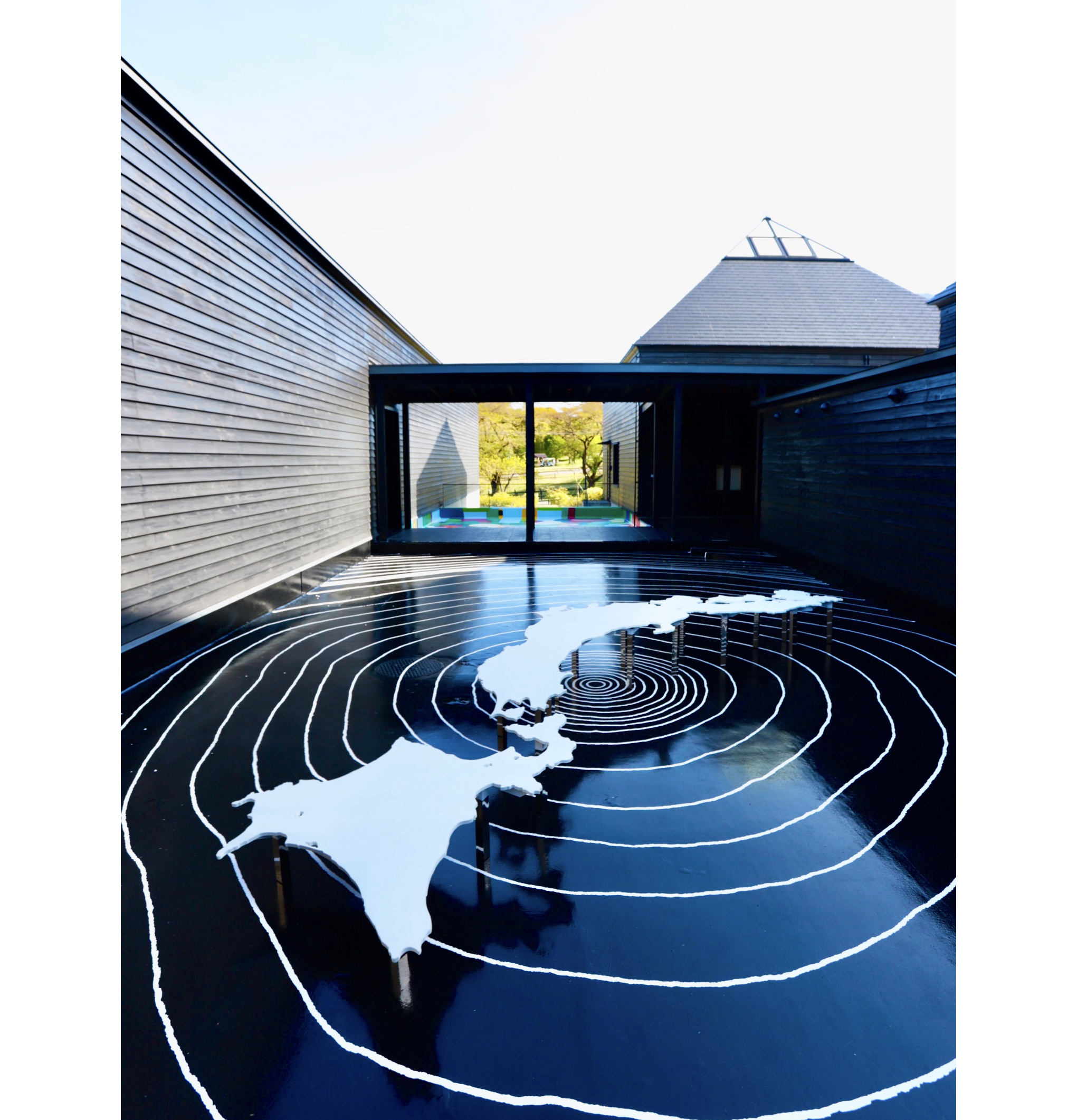 I am exhibiting my work “Bench of the Japanese Islands”, in “A Nexus of Rainbows: Works from the Hara Museum and the Hara Rokuro Collections”, the first exhibition at the newly consolidated Hara Museum ARC.
A bird’s eye view of the museum grounds shows a large arc.In the courtyard located in the center of the arc, “Bench of the Japanese Islands” is placed in the same direction as the Japanese archipelago.On the floor, the annual rings of the fir tree planted when the museum first opened were drawn in line with the direction in which the tree grew.Located in the middle of Japan, the jet-black architecture with its abundant use of wood makes the subtle changes in nature due to the seasons and weather even more striking. It also reminds us of our connection and relationship with the environment.
We hope you will spend a relaxing time in the wide space filled with greenery.
We look forward to seeing you at the exhibition.

It is said that two-thirds of Japan’s land area is covered by forests.  The trees that exist as countless “dots” in these forests draw their own arcs through interaction with the surrounding environment. The unique overlap of lines can be said to be the result of the memory of the land. If we compare the two large arcs drawn by the pavement around the perimeter of the Hara Museum ARC to the annual rings of a large tree, the beautiful architecture that makes abundant use of wood seems to be an invisible compass that has lived in the land since ancient times, revealing itself and opening up to the present. This led to the discovery of the countless small islands of Japan hidden in the individual trees that form the Japanese archipelago. I hope that people from all over the world, including Japan, will visit and sit with the “Bench of the Japanese Islands ” to visualize the centripetal force of Shibukawa as well as to feel the “power of attraction” that acts between distant places. (Yasuhiro Suzuki)

Hara Museum ARC
A Nexus of Rainbows: Works from the Hara Museum and the Hara Rokuro Collections The interview was featured in the 38th issue of “Tansei,” a biannual publication by the Public Relations Office at the University of Tokyo.
The special feature of this issue is “Art of Todai, Art of Todai.

Suzuki has been a member of the Research Center for Advanced Science and Technology at the University of Tokyo for 17 years. In this special issue, you can read about his recent activities, how he came to be a member of RCAST, the photo of a boat with a zipper that opened up the Sumida River, and more in the two-page spread. You can read it from the following link. 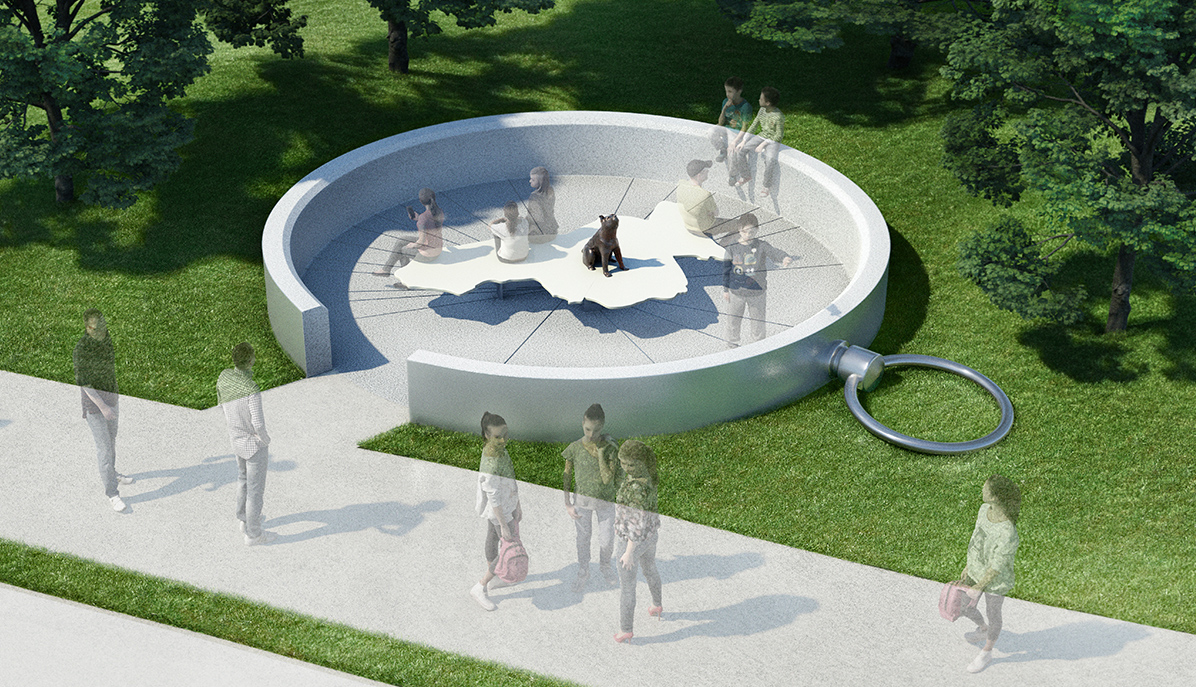 In July 2020, Shibuya’s Miyashita Park will be reborn as MIYASHITA PARK, a new complex integrating park, commerce, and a hotel through redevelopment. As a permanent public art project, I created the “SHIBUYA HACHI COMPASS” on the roof of Miyashita Park in Shibuya Ward.

In Miyashita Park, where you can see the sky, I designed a bench where you can feel the direction of the city of Shibuya with your body. There, a statue of Hachiko, a loyal dog, came early. It is looking up at Professor Ueno, who has become a star. Today, HACHI are like an endless “universe” that is passed on to people all over the world. The imagination that has grown between animals and humans for others may be calling to people’s hearts beyond national borders. Miyashita Park, which stretches from north to south along Meiji Dori Avenue, is like a compass needle that casually tells the direction to people on the street. I hope that through encounters with people from all over the world, from the neighborhood to the globe, Miyashita Park will become the “Compass of Shibuya” for the future. (Yasuhiro Suzuki) At night, HACHI’s body is lit up and a “constellation” emerges. 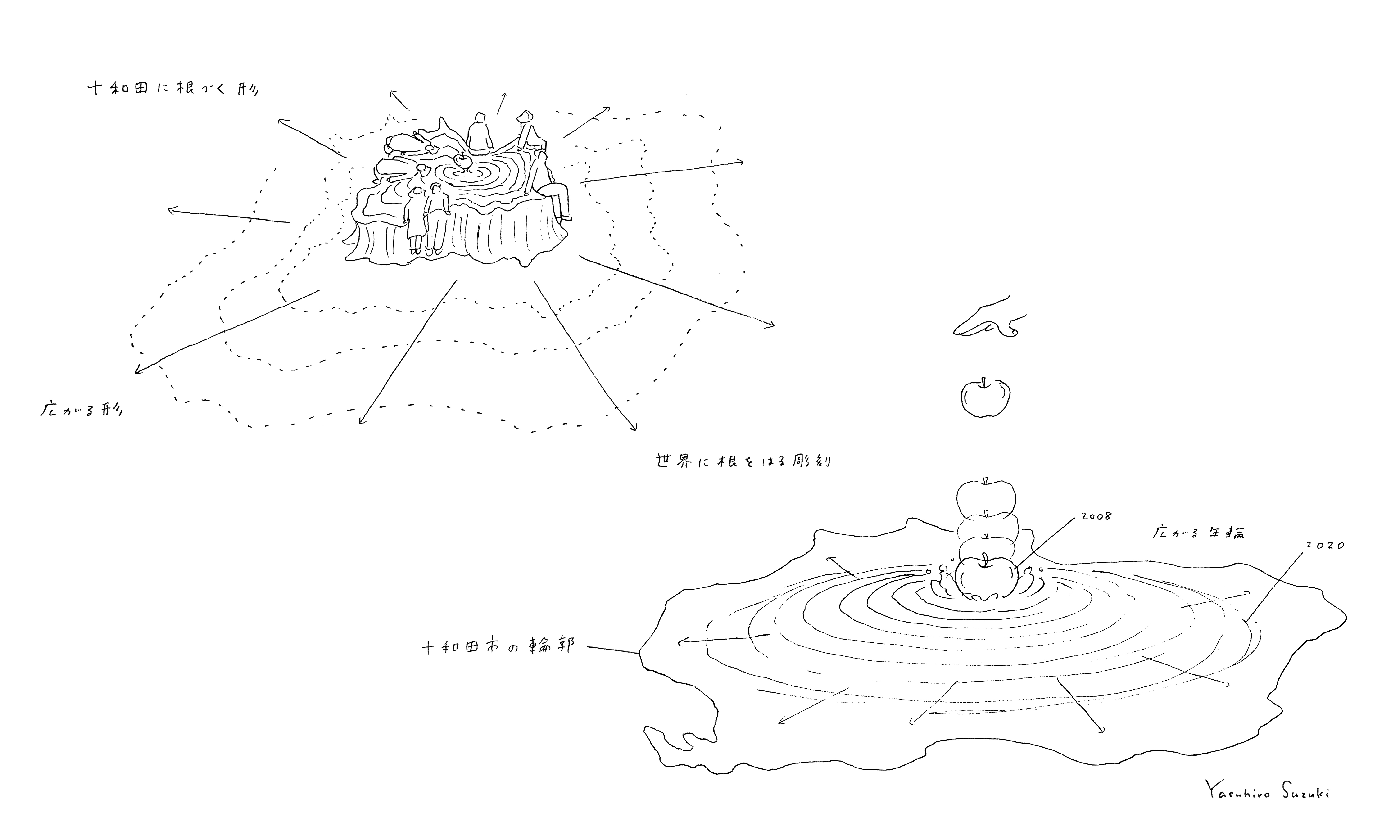 Arts Towada celebrates its tenth anniversary in 2020. This city-wide initiative is unlike any other in Japan, promoting art throughout the city of Towada and along its main thoroughfare, Kanchogai Avenue. At the center of the Arts Towada initiative is the Towada Art Center. The museum promotes creative synergy with unforgettable art experiences, showcasing the latest in contemporary art and promoting exchange between artists, citizens, and visitors to the city.

Arts Towada has taken an approach that pursues the combination of cutting-edge contemporary expression with a universal appeal. Inter+Play, which commemorates a decade since the start of the initiative, embodies that very attitude and will be a year-long exhibition divided into three parts, each with unique content. Inter+Play is a bridge between society, the city and its architecture, and even our own bodies, inside and out. As such, each of its three parts will feature works and artists that allow visitors to go between each as freely as they please and open up new possibilities in the spaces that we inhabit.（Excerpt from the Towada Art Center WEB）

*Exhibiting artists will rotate throughout the exhibition

We will exhibit works at the Ars Electronica Festival 2018, the world’s largest media art festival held in Linz, Austria. The exhibition hall is close to Linz central station PostCity. Exhibitions and events will be held for seven days in the vast space of the former post office.
Last year, in addition to the “Balance Scale for Lightness” and “Nature’s Time Metronome” announced as a new work at the solo exhibition of The Hakone Open-Air Museum, the lineup of “Apple Kendama” and “Aerial Being” to “Himatsubushi Trail” I will expand it in. “Time Killing” is a keyword, an exhibition that approaches the time consciousness of modern people.
Please drop in when you come to the Ars Electronica Festival. Yasuhiro Suzuki “Aerial Being” in Reykjavík

Please drop in when you happen to be in the neighborhood. Japan-Cambodia Kizuna Festival 2018, which is the combination of CJCC Festival and Japan Week Festival of Embassy of Japan, Cambodia-Japan Cooperation Center, and Japan Foundation Asia Center in the purpose to introduce Japanese traditional and modern culture in Cambodia and promote cultural exchange between the two nations.I will participate in this festival.

“Your world from another view” By Artist: Yasuhiro Suzuki 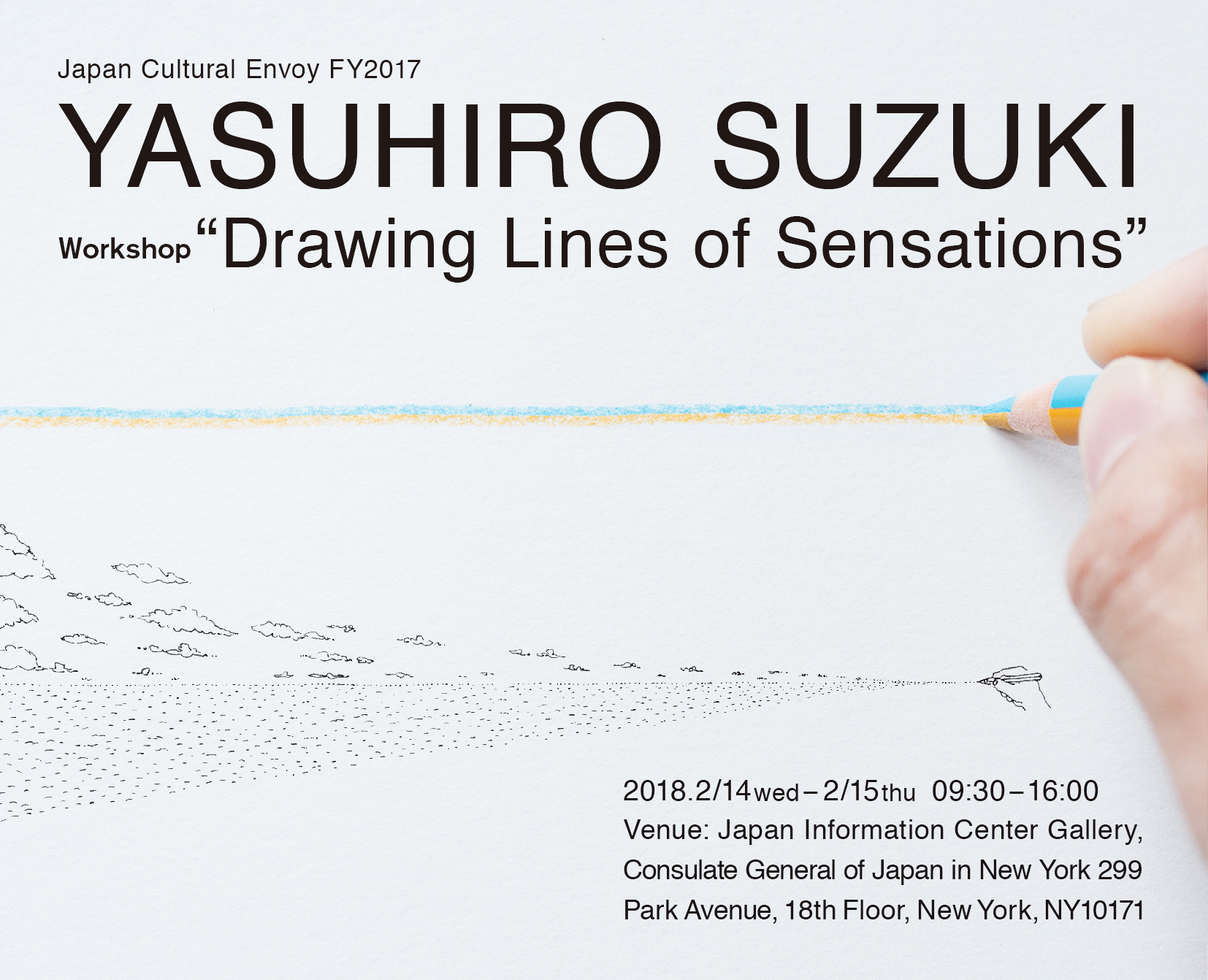 【Workshop Overview】
What kind of color comes to mind when you think of the word “New York?”
This workshop begins by asking participants to choose a single colored pencil. With the “color” recalled from the word “New York” as a key, the workshop serves to awaken your memories and leads you to reconsider the indescribable “sensations” that lie within you, inviting you to draw out “lines” of new sensations between you and others who have gathered. It is a simple workshop that welcomes everyone to take part. This is the final installment of this AXIS Magazine series that started from the vol.146 issue（August 2010）. We’d like to sincerely thank all our regards for their patronage to date. AXIS Magazine Series “Perspective of the Back View” The first London Design Biennale will open this September at Somerset House with over 30 countries participating (7 – 27 September).I will be in charge of work display of Japan.
Nations from six continents will present newly commissioned works that explore the theme Utopia by Design.

Exhibition Overview
In works that approach existing things and familiar phenomena from a fresh perspective, Yasuhiro Suzuki raises questions about everyday life and our way of perceiving the world. Based on the idea of “looking at one thing as if it was another,” which has parallels with mitate, a traditional allusive method found in Japanese garden and tea ceremony, Suzuki connects “here and now” with “somewhere and sometime” in countless works and projects in which he discovers new relationships between things that would normally never encounter each other.
Widely hailed for his unprecedented work in the Japanese design world, Suzuki conceived of this installation for the London Design Biennale after reading about this year’s theme. He plans to create a spatial structure made up of objects of various sizes, drawings, and animation. Transcending dichotomies such as inside and outside, before and after, and part and whole, and systemic barriers such as the past, present, and future, the work suggests the importance of shifting our focus from our own place (everyday life) and considering the wider world. A compass in the shape of the Japanese archipelago,
the silhouette of which was precisely etched out from a 0.15 mm metal plate, and subsequently magnetized.
When placing it carefully into a glass filled with water, one can immediately tell the orientation of the Japanese archipelago without relying on north-south-east-west information.
It feels as if one’s body sensation is scaled up from one’s position to the life-sized Japanese archipelago.Even though just a simple mechanism, it felt quite rewarding as a tool for connecting myself with the Japanese islands by way of the Earth’s own magnetic force.（Yasuhiro Suzuki “Neighborhood Globe”）

The “Compass of Japanese Islands” which became out of stock for a while resumed sale.
You can buy by a museum shop of Hara Museum of Contemporary Art and the online shop.
https://www.haramuseum.or.jp/shop_en/showGoodsList.php?CatId=1&GrpId=630 Recruit “creation gallery G8” greets opening 30 years.
Titled “30 years 30 episodes,” they hold 30 times of talking events with display to look back on 30 years of the gallery.
As for the talking event, 30 people with the connection nominate a talk partner for the gallery and are performed.

Because Michihiko Yanai invited me this time, I will talk with him.I meet him again in about 8 after in G8.I’m looking forward to what kind of talking being made of him and me.